Cult Classics: The Adventures of Buckaroo Banzai Across the 8th Dimension 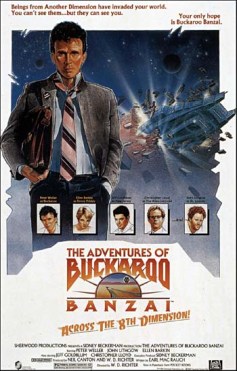 Upon its release, a movie about a rock star-surgeon-physicist-adventurer battling aliens from the 8th dimension, was a gigantic hit. Of course, that’s a lie: the rather insane film The Adventures of Buckaroo Banzai Across the 8th Dimension is a film with an extremely narrow built-in appeal.

But its approach to sci-fi–creating an outrageous protagonist that lives an overblown life of fame and celebrity that includes his popularity as a comic book hero, an army of civilian volunteers to his eccentric cause known as the Blue Blazer Irregulars, ridiculous alien villains with names like John Bigboote, and a band/adventure team known as The Hong Kong Cavaliers whose members have code names like Perfect Tommy and New Jersey–predates the now-popular postmodern genre-bending, reference-heavy trends that dominate the genre. The Adventures of Buckaroo Banzai could be considered the grandfather to the style of sci-fi comedy that Rick & Morty, Guardians of the Galaxy, and the Marvel cinematic universe in general enjoy today. 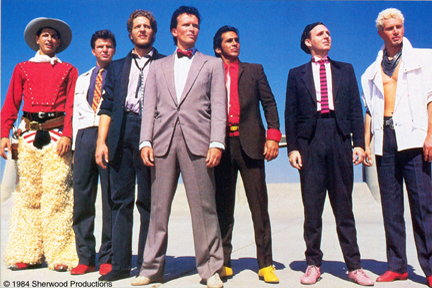 But the sort of knowing, self-referential genre savvy that Buckaroo Banzai plays with was uncharted territory as it sailed into theaters in August, 1984, and it was certainly unwelcome to audiences who preferred the opening of Red Dawn, the anti-commie all-American movie about a ragtag group of teenagers who nobly fight an invasion of the Red Menace off in Midwestern USA, that weekend over the genius brain surgeon rock star who saves the world from alien invasion.

Yes, Buckaroo was out of luck at the box office that year, and it would have died a largely forgotten death but not for the advent of home video and the rise of VHS in the consumer market. Instead, it was released on home video and found its true audience: a group of sci-fi enthusiasts and weirdos alike who would come to create a cult around this offbeat film, and eventually would take over the world and redefine American culture: the nerds and geeks.

How couldn’t Buckaroo Banzai end up being a hero to the intellectually gifted but socially and athletically inept? While the rest of the world had Axel Foley and Rambo and Rocky–regular guys who used their street smarts or brute power to win over their foes–there were few heroes that appealed to the group of guys that enjoyed reading sci-fi novels and computers and scientific pursuits. That is, until Buckaroo Banzai. He was a nerd’s dream hero: not only was he a neurosurgeon and physicist but also a rock and roll star and a daring adventurer. I don’t want to oversell it, but to paraphrase Homer, he was like 10 Super Bowls combined into one awesome hero that eggheads and geeks could both look up to and relate to.

Buckaroo Banzai tried something that’s rarely succeeded in US pop culture: to make smart seem cool. The archetype for the “smart guy” is either 1) a socially awkward nerd, 2) an insufferable, pretentious bore, or 3) an evil genius. 1980s American pop culture was particularly intolerable of the brainier segments of the population, as its comedy films would bear out: “nerds” were ugly, physically weak, socially hopeless, and often the rightful target for humiliation and scorn by protagonists. This carried into the 90s, where the “nerd” stereotype became cartoonish, as anyone who’s watched an episode of Saved by the Bell would attest.

The image for the introverted intellectuals and technologically savvy finally turned sometime in the 2000s when “geek chic” became the hot new trend and suddenly an entire generation strove to emulate “geek” culture. The internet had a lot to do with this, as did the fact that some of the more successful people in the US tended to work in tech fields. Alas, even the truly nerdy in the world lose out in this instance since pop culture in the US merely follows where the money is.

But those laments of the shallow adoption of nerd culture are for another kind of essay entirely: here, let’s focus on a true hero of the nerds and how he became such. As stated, until recently nerd culture did not fare well with the rest of US culture, which made it special to those who actually lived and engaged with it. Early adopters of the internet would while away many hours discussing their favorite Battlestar Galactica episodes or pour over various trivia of the Star Trek universe or traded tapes of episodes of Mystery Science Theater 3000 they hadn’t seen. They could discuss obscure sci-fi films and novels that most people hadn’t heard of, or the merits of long-forgotten old Saturday morning cartoons, and get into detail-obsessed arguments over film and comic books and science fiction that the rest of the world couldn’t care less about because the latest episode of Friends held them in rapture instead. Yes, the 1990s internet culture were halcyon days for nerds.

And for the nerds of the world–the true nerds, who felt more comfortable reading William Gibson and interacting over the internet than going to parties and hanging out with (honestly, what they perceived as) dullards–Buckaroo Banzai was a hero to cheer on. Even though he was super-smart, he was also a nice guy; his smarts won him acclaim and admiration, not scorn; and he could mix it up in a physical fight just as well as any other action hero.

And he was there for nerds to look up to before their own culture was ripped away from them piece by piece and turned into the latest trend, before their favorite comic books became the biggest movies in the world, and before it became desirable to pop on a pair of glasses, checkered shirt with a shirt pocket, and a Star Wars pin and proudly identify that you were a “nerd” to anyone that would listen.

Fortunately, true believers, Buckaroo Banzai is one of the few pieces of that long-gone hermetic nerd culture that is still left untouched by the cultural osmosis that gentrified so many nerd properties. Perhaps it’s unassailable because except to a certain mind, it’s a nearly unfathomable film. Like those Magic Eye illusions, it’s not immediately apparent to people just how anybody sees anything in it: besides its rather over-the-top premise, the film itself plays narrative tricks that don’t take the time to explain to the viewer what’s going on in any given scene. Action shifts quickly, characters are barely introduced before they become part of the plot, and any explanations are given cursory expository dialogue before being accepted as part of the fabric of the film.

Moreover, the logic of the film follows comic book logic with just as flimsy justification. A good example of this is the character Penny Priddy: she shows up at a gig of Buckaroo Banzai & The Hong Kong Cavaliers (the name of his Totally 80’s band). Mid-song, Buckaroo senses that someone out in the crowd is sad and not having any fun; he spots Penny in the crowd, stops the show, and sings a quiet ballad to her. She pulls out a gun and fires it. It’s later explained that it was a suicide attempt, and Buckaroo visits her in jail, where he bails her out. She joins his gang, and sooner than later he deduces that she’s the identical doppelganger of his recently deceased wife; they begin a love affair.

And that paragraph alone should give you some clue as to how this film is plotted and the density of its plot. Very little of this is explicitly described to you and the film doesn’t seem to care if you catch it all. It’s a live-action comic book, but instead of having these quickly described actions available for you to flip back to in panel form for reference, the film just continues forward. It’s confusing the first time you watch Buckaroo Banzai but also weirdly engaging: you’re so overwhelmed by everything that’s happening that–again, if you’re of a certain mind–it just encourages you to watch it again to catch everything you missed the first time.

Which explains why it was better received on home video, where you actually could watch it again to pick up on everything you may have missed. There’s even a wildly clever meta joke in the third act about this: Buckaroo and one of his Hong Kong Cavaliers pass by a watermelon in a lab; the Cavalier asks Buckaroo why that watermelon’s there, and Buckaroo just says, “I’ll tell you later.” He never tells him–or the audience–later why that watermelon was there, of course. It was  revealed by the director of the film, W.D. Richter, that he included the scene to see if the editor was keeping up with continuity; it turns out he wasn’t, but Richter liked the non-sequitur so much that he kept it in anyway.

Similarly, The Adventures of Buckaroo Banzai Across the 8th Dimension is a non-sequitur of a film–an oddly shaped piece that doesn’t quite fit into any easy categorization or even approachable format for casual fans of sci-fi films. But that’s also its enduring appeal to the cult film fan: it’s such an odd duck that it can’t helped but be loved by the right audience.

Let the world appropriate all of the quirky corners and once-obscure bits and bobs that were revered and cherished by the nerds and geeks of the world in the past. Turn every Marvel book into a billion-dollar franchise; make 100 Star Wars films; suck the soul out of Star Trek, making it yet another big-budget explosion-heavy blockbuster. As long as I still have Buckaroo Banzai to call my own, that’s enough nerd culture for me to float on.