Who doesn’t love “Weird Al”? I know I do: the first record I ever independently bought was In 3-D in 1988 from a flea market when I was 6. I’ve lost a lot of great vinyl albums over the years due to either lending them out to the wrong people or as casualties of broken-up relationships, and there is maybe no vinyl I wish I still had than that first one I bought.

“Weird Al” Yankovic—the most successful musical parody artist ever—came to the mainstream just as my own life began and has been one of the most consistent entertainment figures throughout my entire life. After a string of incredibly successful albums and music videos throughout the 1980s that parodied Michael Jackson and Madonna, among others, “Weird Al” crossed over into TV, with his own television shows—Al TV, a bit of infrequent special programming that aired on MTV, and The “Weird Al” Show, a Saturday morning show that ran for a season.

As I grew up, “Weird Al” was always there, parodying the music I grew up listening to. I didn’t hear “Smells Like Teen Spirit” first—I heard “Smells Like Nirvana.” In fact, I had heard a lot of songs initially through “Weird Al”’s parodies, since he was “kid-friendly” and functioned as a filter between the “adult” world and a child’s in American culture. He would include polka medleys in his albums that would take on the biggest songs at the time, along with parodying the nascent alternative music scene in the 1990s.

As the culture in America evolved, so did “Weird Al”, always keeping a finger on the pulse of things and producing spot-on parodies and stylistic pastiches. In the 2010s, “Weird Al” even kept up with the fast-moving brave new world of the internet by making an album’s worth of music videos for his album Mandatory Fun, releasing a new video every day for a week online and whose songs tackled modern memes, styles, and cultural figures

Besides this, Yankovic has become an accomplished music video director for both his own music and other artists and has released a successful children’s book. His live shows are well-known for being gigantic productions, complete with complex staging and costume changes. Over the course of his 40-year career, “Weird Al” Yankovic has remained a highly visible and well-loved cultural figure, with his initial audience now having children that are the same age as they were when they first discovered his music. Most recently, he was the bandleader for the bonkers talk show satire Comedy Bang Bang, which drove home to me just how much of a constant “Weird Al” had been in my life.

His music is funny and clean (although his original songs tend to take surprisingly violent, dark turns at times), and he has maintained a completely scandal-free life while becoming an example of how kindness and hard work can be the true secret to success.

So why hasn’t he ever made a movie? Well, he did—and it bombed at the box office, which discouraged him from ever trying to make another feature film. This is unfortunate, since his only starring role—1989’s UHF, which he also wrote—is a great distillation of his sensibilities and humor. Besides featuring a great parody song—Dire Straits’ “Money for Nothing” video, that becomes about The Beverly Hillbillies—UHF allowed for “Weird Al” to parody a number of films and television shows while also delivering a solid goofy comedy film.

George Newman (Yankovic) is a dreamer who can’t hold onto a job or put together any sort of meaningful life, instead daydreaming his life away when he should be working or paying attention to his relationship. After being fired from yet another low-status job and finding his relationship with his girlfriend (Victoria Jackson) on the rocks, George’s luck seemingly begins to change after his uncle wins local UHF Channel 62 in a game of cards and puts his nephew in charge.

However, the station has a number of problems: it airs cheap syndicated re-runs and is populated by a number of oddballs—including receptionist and aspiring news anchor Pamela Finklestein (Fran Dreischer) and a mad-scientist engineer Philo—and is facing bankruptcy. Undeterred and encouraged by his new position, George heads over to rival station Channel 8 to introduce himself to the competition. There, he is dismissed by owner R.J. Fletcher (Kevin McCarthy) and soon befriends hapless janitor Stanley Spadowski (Michael Richards), a manically dedicated custodial servant, giving him a job at the television station.

George’s hyper-active imagination turns out to be a perfect fit in his new job, as he begins to develop original programming to revive the station’s ratings, even hosting his own children’s show, Uncle Nutzy’s Funhouse, which is a complete disaster.

Things seem bleak after George sleeps through an important date with his girlfriend, instead imagining the Dire Straits parody, and the station facing imminent closure, and he walks out of a live airing of his kids’ show. However, Spudowski wanders onto the live set and becomes an immediate sensation thanks to his out-there approach to entertainment and goofy charisma on-camera.

Realizing he has a major hit on his hands, George quickly populates the channel with insane shows that grab the audience’s attention while also trying to win back his girlfriend. But rival Fletcher sees the small UHF station is overtaking his channel in the ratings and tries to enact a hostile takeover. George puts together a telethon to raise funds for the station and begins selling stock in the station to the public, but Spudowski is kidnapped by Channel 8.

Does this movie have a happy ending? Of course it does. Is this movie surprisingly insane? It sure is—and it goes to show just how weird seemingly clean-cut “Weird Al” can get.

George: Shut up, you little weasel!

It’s funny that “Weird Al” has retained such a family-friendly image considering how dark some of his original songs can get. Among many macabre tunes, one song, “Christmas At Ground Zero,” details the first Christmas after nuclear apocalypse, after all. It shows that “Weird Al” is not just an adult, but one that can often have a pitch-black sense of humor.

UHF is a great example of just how funny “Weird Al” is outside of parody. Although making comedy songs out of big hits have always been his bread and butter, his original music feature stellar comedy songs that cover unrequited love, emotional isolation and bitterness, absurdity, and a peek of the adult that resides behind the “Weird Al” façade. Similarly, UHF features often wildly violent and over-the-top comedic scenes that are sometimes a little shocking to an audience that wouldn’t expect such material from the same guy who made parody songs about food.

One particular scene that demonstrates this in UHF is when George has a guest on a talk show he’s hosting, wherein local shop teacher Joe Early (played by laconic comedian Emo Philips) demonstrates how to operate a table saw. Early begins the demonstration by sawing a piece of wood in half, only to saw his thumb off and bleed profusely all over George. Of course, the shop teacher isn’t disturbed by this, only casually saying, “Just call me Mr. Butterfingers!” as George frantically searches the floor for his detached thumb.

UHF is filled with completely insane comedic bits like this, played for laughs but with a surprisingly dark and often cruel undercurrent, such as Spudowski’s featured “prize” to a lucky audience member to take a drink from Mr. Firehose—in which a child opens their mouth to take a drink while Spudowski unleashes a powerful stream of water that knocks them backwards—or the game show “Wheel of Fish,” where contestants have an opportunity to win a fish from a carnival wheel or take a mystery prize that’s inside a box. As we’re shown, one contestant chooses the box over a red snapper, only for it to be revealed that there’s nothing in the box. As the Japanese host gleefully (and forcefully) admonishes her, “Stupid! Stupid! Stupid! You’re so stupid!”

Rated PG-13, UHF pushes the envelope on 1989-era movie and comedic conventions alike. While the overall direction has a workman-like quality, the imagination displayed on-screen makes it more like a live-action cartoon than anything. From its film and TV parodies to the generally off-the-wall sense of humor that makes the film so funny, UHF feels more like an intimate independent comedy than a major studio production (which it was).

In fact, UHF made (now long-defunct) Orion Pictures think they had a major hit on their hands, as it received the most successful test screenings in the studio’s history. Releasing it in the summer of 1989 as a potential blockbuster, it was instead obliterated at the box office, opening against Batman, Lethal Weapon 2, Ghostbusters II, When Harry Met Sally, Honey, I Shrunk the Kids, and Indiana Jones and the Last Crusade. Maybe if it opened a month earlier it would have been a big hit; instead, this little offbeat comedy featuring a well-loved entertainer suffered a death by a thousand cuts.

There’s something so enjoyable about movies that refuse to take anything seriously: film-making, narrative, and even themselves. And they’re so rare: outside of stone-cold classics like Monkey Business and A Hard Day’s Night, absurdity is a quality in the film world that’s been neglected over the 100+ years movies have been produced.

Which is unfortunate since absurd comedy—when done correctly—is delightful. The entirety of the popular [adult swim] block of programming can attest to this, and many absurd comedies are fondly remembered and loved by those that got the joke and can surrender to the flow of these movies. 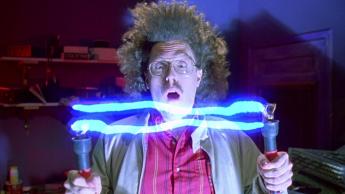 UHF belongs to that rarefied realm of comedy: although it failed at the box office, its audience found the film upon its VHS release, especially kids (like me), whose parents rented this movie for them one boring weekend and found the movie a revelation—particularly since one of their heroes, “Weird Al”, was the star.

It’s a delightfully insane movie and something comedy fans will immensely enjoy. Although nearly 30 years have passed since its initial release, UHF still holds up. But it’s in danger of being lost in the sands of time. After all, the typical “Weird Al” fan must be around my age, and I’m part of a rapidly ageing demographic. Which is why I implore younger (30 and under) readers to seek this film out. You can rent it on YouTube for 3 bucks, after all. If you’re not satisfied, I will refund you. Or someone will. I’m not made of money, after all.

In my eyes, “Weird Al” Yankovic should be honored—not by the Grammys (he already has four), but by his own fans. . Or maybe that’s what his concerts are already: his fans coming together to thank him for all the joy he’s brought to their lives. He’s found a wild amount of material success already but based on everything I’ve gathered about the man himself, he seems like a thoroughly decent human being, and this is something commendable—especially since a lot of people that have attained his long-lasting success kind of seem like jerks.

All I can do at this point is try and raise more awareness for the only film he’s ever written and starred in. It’s not only completely worth any time investment but provides the viewer with the only thing a comedy can hope to deliver: providing its audience with a really fun couple of hours for its efforts.