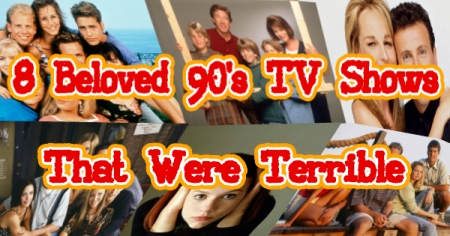 Listen: it’s not very positive to look back at the nostalgic past and trash shows that large swaths of people cherish–but it’s the internet and being negative and mean about things pulls more traffic than positive articles so here we are.

Besides this, even though the 90’s is enjoying a nostalgia boom due to Millenials (which I begrudgingly belong to, based on definition) getting older and are desperate to recapture the last good decade of their lives, it’s not like everything that was made at the time was particularly good. Popular? Sure. But for every evergreen stroke of television genius like Seinfeld or Mystery Science Theater 3000, there are–well, the shows on this list, which enjoyed a great amount of popularity at the time but upon reflection may not hold up to one’s memory of their once-favorite show.

And hey, if you enjoy any of these shows, particularly because you were a kid when they aired and seemed great at the time, by all means continue to enjoy them and dismiss the more acidic attacks that will surely befall them in this list. Otherwise, in the opinion of this overeducated pop culture dorkus malorkus, here are 8 beloved 90’s TV shows that are terrible. 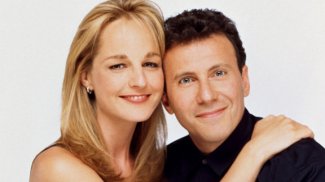 If only the title of this show was short for I Was So Mad About You That We Entered A Murder/Suicide Pact. You remember this show: Paul and Jamie, two 30-somethings who get married and the audience was forced to endure their awful neurotic relationship on Thursday nights after Seinfeld in the 1990s? What hateful human beings both of these characters are. What a waste of time and money this show was. Who could care about either of them or what happened to them in life?

Paul (creatively named after Paul Reiser, who created and starred on the show) was a whiny New York City documentarian who quibbles and obsesses over every triviality like an unfunny Jerry Seinfeld. Jaime (Helen Hunt) is a relatively terrible, self-centered woman who picked fights with her husband and everyone else around her and spoke like she was a genius among peons. Together, they were that couple you love to hate! Unbelievably, this show was a huge hit and ran for what seemed like a billion seasons before the final episode ended with both characters hanging themselves. 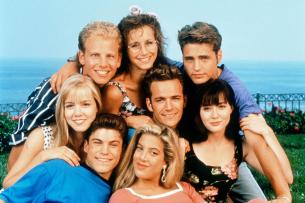 Everyone’s favorite 30-something high-schoolers enacting the tumultuous life of being children of millionaires in Beverly Hills, California was a huge hit in the 90’s. While this show appealed heavily to the 12-and-under crowd, anyone who watched this show over the age of 16 must have suffered a head injury to have enjoyed this. Looking back now 20+ years after it first aired, this show is objectively terrible. Like, something that churns one’s stomach in frustration at just how insufferable and petty these characters’ problems are and how they’re framed.

The fucking Peach Pit? That’s where millionaire teens are hanging out? That’s stupid. Their love triangles were stupid. Ian Ziering was ridiculously old to be playing a “teenager.” So was what’s-her-face, the one who played Grandma Andrea. In short: what the hell, 1990s? Were things just that good that we were supposed to care about these fabulously wealthy jerks as they ran around playing grabass and crying into their $10,000 sleeves? Awful. 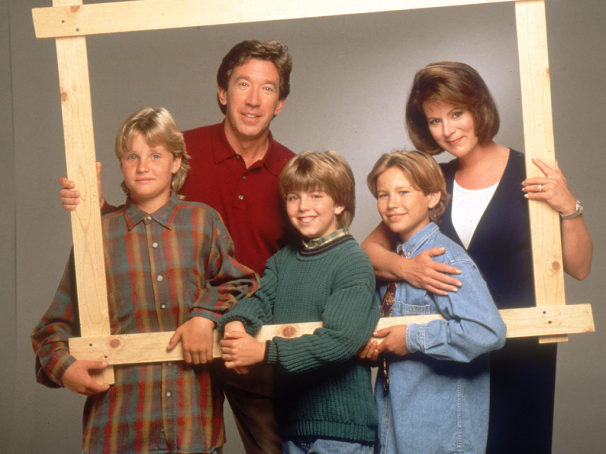 Hey, at least this show was relatively clean-cut. Sure, it wasn’t funny and the characters weren’t likable and it was formulaic as hell and looked shoddy, but at least you could watch it with your family. Your stupid, unfunny family.

Tim “The Tool Man” Taylor (Tim Allen) is a TV personality with his own home improvement (GET IT?) TV show. But he’s an over-macho know-it-all buffoon who seriously injures himself constantly on his own show like a fucking idiot. But hey! At least he has his family: his nagging, passive-aggressive wife (Patricia Heaton? Sure.) and his three sons, Huey, Duey, and Louie. One of them was a teenage heartthrob, which surely means he’s one of the biggest stars in the world at this point, right? Oh, and he’s a fucking idiot at home, too. Without his creep neighbor whose face we never see dispensing weekly advice  that saves Tim’s bacon every damn time, he’d probably end the third episode divorced and drinking scotch in a poorly built lean-to. Anyway: dreck.

Having already torn this show a new one elsewhere on this site, it seems pointless to do it again. But what the hell? This show is infuriating. Corey (Ben Savage) is some goofy ass of a teenager with a friend named Shawn and an on-again, off-again relationship with a girl named Topanga. And we’re supposed to care about him because….he’s an ass?

The first article written on this site tearing this show a new one was met with negative comments from people who loved this show when they were younger, but if you identified with a dope like Corey, well….that’s unfortunate. Why? Because he was unattractive, willfully ignorant, kind of a jerk, clueless, and overall impermeable to learning any long-term lessons. And because it was on TGIF, you suffered through it a half-hour at a time for years watching this asshat fumble gracelessly through adolescence. Watch an episode today! If you liked it when you were 10, you will be embarrassed and perhaps less enthusiastic about defending its merits today, simply because it has none.

Oh lord, this show. We get it: doctors’ lives are dramatic. It was great when it was done the first time when it was called St. Elsewhere. Instead, Anthony “Revenge of the Nerds” Edwards, George “I Became A Big Star And Left This Show” Clooney, Julianne “I Was Never In Anything Again” Margulies, and Noah “Me Neither” Wyle starred on this one-hour drama that ran on Thursday nights at 10 PM after a (mostly) enjoyable evening of television ended.

Gritty(?) for its time, ER seemed to sucker millions of people with its overwrought professional drama and interpersonal drama among the staff. For 1994, this seemed groundbreaking–but then again, NBC was on a heck of a hot streak so it may have just been mass hysteria that broke across the TV-viewing audience that hailed this show as genius. But in the pay cable TV world of the 21st century, when masterpiece dramas are unfolding nearly every year on television, ER comes across as hacky, hokey, and rather thin soup. But back then, this aired for free over the airwaves so you got what you paid for.

That’s right: this show–which is still being hailed as brilliant television–is, well, not very good. Don’t read this incorrectly: it was good…when you were, say, 15. But if you’re in your mid-30s, re-watch this show and you may notice something about the characters and the show’s tone in general: it’s all about whiny, over-dramatic, self-centered teenagers.

Which yes, is what makes the show very realistic because teenagers are simply the worst. But once you pass that stage in your life, you may find that watching a television show that realistically depicts people of this age wildly irritating. Because teenagers, once you are no longer one, are wildly irritating creatures. And you were awful as a teenager, just like the characters on this show are, which is why you liked this show when you were that age. But to watch it as an adult, you want to tell Angela to shut up and for everyone to stop being such assholes. But they wouldn’t listen and instead sulk about how you don’t understand what they’re going through. Because teenagers are the worst–and because this show so faithfully depicts how teenagers actually are, My So-Called Life is also the worst.

On the other end of the realism spectrum, there’s Dawson’s Creek: sort of a weird Frankenstein hybrid of the drama of My So-Called Life and the insane fantasy of Saved by the Bell, Dawson’s Creek centered around a group of friends and lovers who struggle through their privileged adolescence by moping about and being stupid with each other.

Ugh, this show. It was so beloved by young people in the late 90’s and now watching episodes in the present-day, it’s mystifying. Every episode has the tone of an after-school special and roughly the same structure. Dawson (James Van Der Beek) was a gorky wimp that used his romantic sincerity in the most passive-aggressive manner; Pacey (Joshua Jackson) was the most lukewarm “bad boy” you could imagine; Joey (Katie Holmes) was a wishy-washy nothing romantic interest; and the one potentially interesting character, Jen (Michelle Williams), was portrayed as a low-class slag who is killed off in the final episode. Eesh. Anyway, much like many of the shows on this list surrounding teenagers, how any adult could find any of these shows good or even slightly interesting as adults now is a strange comment on how Millenials are stuck in the past.

Hey! It’s the worst sitcom ever! And it’s one of the most popular shows of all time! We all know what Friends is: a group of friends (GET IT?) living in New York City are co-dependent messes with each other, to the point that out of the six main characters, only one is never seriously romantically linked with another and the series ends with four of the six of them romantically involved. Are they all so insufferable that they just decided to settle down with their close friends, the only people on Earth who could stand them? Our spies say yes.

Why is this show so terrible? Maybe for the same reason why it was so popular at the time: it captured the zeitgeist of the 90’s–including potentially racy sexual humor, “wacky” characters goofing off in NYC, coffee shops, weird sartorial choices, and muted lighting and faux-boho set design–so well that like the Hypnotoad, audiences were simply compelled to watch it.

And it looks awfully dated at this point: the humor is stale, the pacing and tone is sluggish by today’s standards, and although it may have seemed novel at the time, the decades that have passed since its first airing has turned this show into a time capsule. Unlike Seinfeld, which has retained a large amount of timelessness (mostly because it was far funnier and better written), Friends may as well have been sponsored by Beanie Babies and 56K modems.

Besides all of these salient points, as the series went on it became apparent that every character was a terrible person. Ross was a whiny, selfish fool; Rachel was a spoiled, mean bitch-woman; Monica was a control freak maniac; Joey was a slutty idiot; Phoebe came across as nice on the surface but was as shallow and mean-spirited as everyone else; and Chandler…OK, well Chandler was pretty cool. And the actor that played him was into pills, which makes him cool too. But one good character a show does not make. Outside of that, this show is tiresome to watch more than anything and it’s a series of diminishing returns with very little rewatch value. Simply the worst of the bunch.