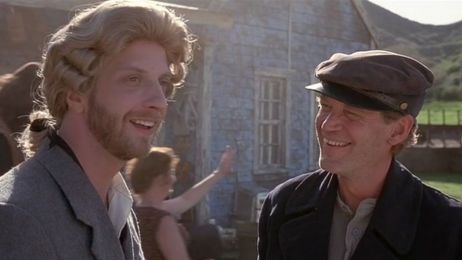 Chris Elliott’s comedic schtick is not for everybody. Having first launched his career as a writer and performer on David Letterman’s old late night show in the 80’s as an absurdist figure who would do bits playing odd characters with names like “The Panicky Guy” and “The Guy Under The Seats,” usually ineffectual characters who had distinctly odd problems and traits, Elliott started off weird and just kept going from there.

Another example of Elliott’s weird take on comedy: for his comedy special on Cinemax in 1986, Elliott staged FDR: A One Man Show, where he played the 32nd president despite neither looking or making any effort to sound like the honored statesman, stating obviously false and bizarre facts about FDR’s life and the history of the country, and ending the special by smashing fruit on stage a la Gallagher. So if that sounds funny to you, then Elliott’s comedy might be right up your alley.

After starring in his own TV show, the fantastically weird Get A Life, where he played a 30-year-old paperboy who frequently died at the end of episodes, only to show up unscathed the next. Elliott–along with longtime creative partner Adam Resnick, who worked on Get A Life and David Letterman’s show with him–made Cabin Boy. Initially, Tim Burton was set to direct the movie but backed out to do Ed Wood, staying on as a producer and leaving Resnick to helm the project.

And, like all of Elliott’s work, his feature film vehicle as the main star (and to this date, only) is a very strange comedy. Taking place in some indeterminate reality where limousines exist but so do hard-scrabble sailors from the 19th century, mythical sea creatures, and a finishing school for upper-class boys/men whose graduates are decreed “Fancy Lads.”

Said fancy lad in 1994’s Cabin Boy is Nathaniel Mayweather (Elliott), a snobby, spoiled man-child who has just graduated from said finishing school despite being obnoxious to everybody and downright stupid. Invited by his father to voyage on the Queen Catherine to Hawaii where he’ll take his place in the family business, instead Mayweather mistakenly boards a ship named The Filthy Whore, mistaking it as a theme boat that’s play-acting like it’s a disgusting fishing boat manned by dirty, stinking seamen. 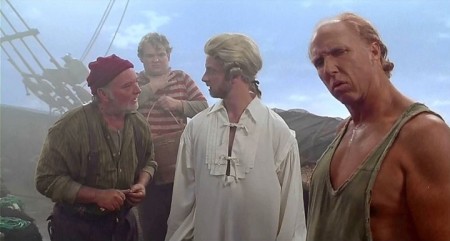 Of course, when he wakes up and realizes that it is a disgusting fishing vessel and these are foul-mouthed, nasty fishermen, Nathaniel is horrified. And rude. And, well, kind of a jerk. But to be fair, nearly everyone is kind of a jerk at the beginning of this movie: the seamen (played with bearded, filthy gusto by James Gammon, Brion James, and Brian Doyle-Murray) are rather repulsive creatures who hurl abuse and anger at both Nathaniel and their cabin boy Kenny (played with delightful stupidly by Andy Richter). Since Nathaniel’s a self-centered jerk, he tricks the idiotic Kenny into steering the ship towards Hawaii, which sends them into a dangerous area called Hell’s Bucket. When Kenny is swept away to sea, however, Nathaniel takes over the position to pay for his passage to Hawaii and escape being outright murdered by these old salts.

Mostly handing him tasks that are meant to kill him, including floating him behind the ship for a week without food or water on a separate floating platform–where he spots a shark-man and hallucinates after drinking seawater–they are stunned to find Nathaniel alive and begrudgingly let him back on the ship. Maybe his time on the raft affected his brain because he returns to the ship with much more enthusiasm about his task as a cabin boy and tries to endear himself to the crew.

And here the film shifts into its weird second act: Nathaniel and the old salts trying to survive inside of Hell’s Bucket with our Fancy Lad reverting to being an over-eager child hoping to impress and learn from the gruff sea captain, Pappy. When Nathaniel “saves” a woman named Trina, who he spots floating in the water (she’s actually just trying to break a swimming world record), he also tries to woo her–of course, since he’s an idiot he fails to do so. Fed up with these new additions to the crew, the fishermen decide to strand the two of them on an island and steer out of danger.

On the island, Nathaniel has his first sexual experience with a six-armed woman and becomes a Man. Immediately after this, Trina is attracted to him. But the six-armed woman’s husband, who’s a giant, comes after Nathaniel and almost kills him when the shark-man from before saves him. The crew, having found themselves grown to like Nathaniel, let him and Trina back on the ship and they sail on. Reaching Hawaii, Nathaniel rejects his father’s disappointment and instead heads back to The Filthy Whore to take his newfound place among the crew as their cabin boy. The End.

What makes Cabin Boy a cult classic is its one-off appeal and creation: it’s just too strange a comedy film for fans to ignore. Elliott, already a limited appeal comedian, plays his character as unlikable as possible at first, which means that unless you actually find this character funny it’s difficult for an audience to lock onto him as a protagonist. Similarly, the Old Hollywood style that Resnick applies to the look of the film–particularly the overweight, hardscrabble fishermen and the intricate grubbiness that imbues The Filthy Whore–can appeal only to a certain audience that would find these sorts of details amusing. Finally, the film itself is inherently confusing, taking place sometime between the 18th century, the mid-20th century, and modern times; it’s a film populated by vengeful ocean gods, shark-men, and six-armed sirens; and its main character shifts from being an obnoxious jerk the audience is encouraged to dislike to a man-child that all of the characters around him–who moments before despised him–suddenly find themselves loving.

And it’s very funny because it’s such a confused film. Elliott had one of the weirdest senses of humor of the late 20th century and his big-screen feature film reflects that. Mostly it’s because Elliott doesn’t care if you like the characters he plays: like his standout character Chris Peterson in Get A Life, he purposely wants the audience to hate Nathaniel and find the supporting cast disgusting and make the overall look and feel of the film purposely ugly. He’s daring the audience to continue watching. And if you’re in for his sideways take on comedy, you’ll like Cabin Boy–it’s unbelievably stupid, but then again, so is its main character. Chris Elliott wouldn’t have it any other way.