Although somewhat difficult to imagine in contemporary times, for the majority of human history life was a brutal experience. Minor cuts could turn into major infections that could necessitate amputation or end in death; a case of the flu or strep throat could be terminal; violent crimes were difficult to investigate to any accuracy; might meant right most of the time; and there was little in the way of comfort from the elements. Not to mention that unless you were the right gender and skin color, you were pretty much out of luck when it came to holding any power or say in most matters.

Although shows like Game of Thrones (which, although it’s based on medieval times, also inhabits a fantasy world) try to portray conditions in the distant past, more often than not a cleaned-up version of history is depicted in television in film. Sure, a show may be set in the 18th century, but it will mostly center on royalty that lived in far better conditions than the vast majority of the population and rarely delves into the rather grimy milieu and difficult struggle that was daily life for most people in the past.

Even going back less than two centuries reveals a world far different from ours: social conditions were crude and unforgiving, where using racial slurs was the standard and perpetrating awful crimes against ethnicities other than white European were seen as impolite but not particularly punishable. Women were still largely dismissed from civic affairs and–unless wealthy–were even less included or welcome in business professions. Meanwhile, medicine was still in its infancy, and although there was some rudimentary knowledge of the human body and diseases, the tools available and general ability of doctors to combat afflictions–particularly when it came to surgery–was limited at best.

Meanwhile, there was no regulation of any sort on, well, anything: any sort of drug was legal and available, leading to widespread drug addiction, while alcohol was volatile and produced with little to no oversight. Although dealings of property and land were subject to oversight by local governments and rules of property law, the further to the outskirts of civilization you pushed, the easier it was for unsavory people to rob and take from you without proper law enforcement to either deter or investigate any wrongdoing. 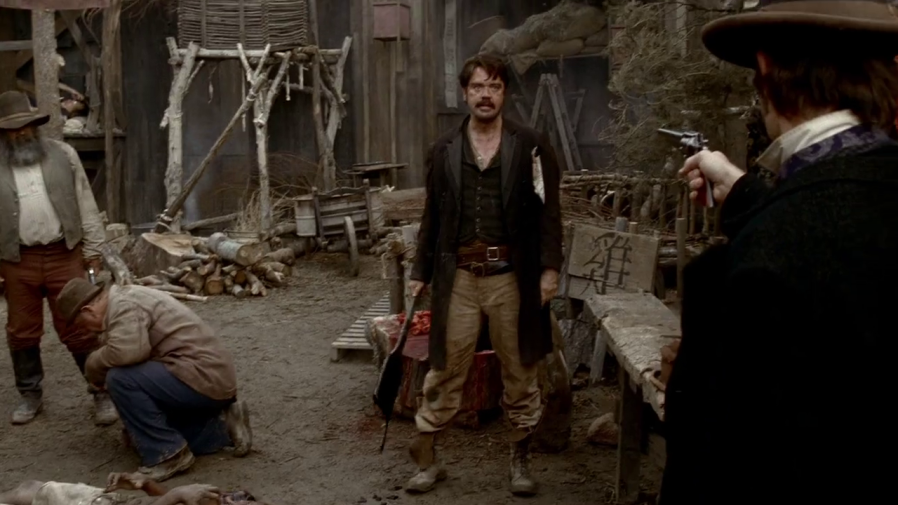 There was no indoor plumbing, no basic antibiotics, and–once you went past an invisible line of territories–no real protection from either the wilderness or other people. In short, life was rather uncomfortable and almost always unstable. There was a 40% child mortality rate in the 1870s and the life expectancy topped off at 49. This kind of world is hard to imagine in 2017, where light is available at the touch of a hand and with just a few keystrokes you can find out anything you want on the internet. Forget indoor plumbing: we truly live in the future in comparison to life back then.

Deadwood depicts what daily American life in the Old West in the 1870s was like in every disgusting detail. Running just 3 seasons and 36 episodes, it’s one of the bigger-budget Western series ever created and its unflinching, realistic depiction of the Old West portrays the time and place as rough, violent, and often unfair. In other words, it depicts the past rather accurately.

But Deadwood also does something rather fascinating and unexpected for what initially seems like a violence- and sex-filled HBO drama: it depicts the building of civilization from the ground-up. Although initially a lawless town in the Dakota territories, slowly the town begins to coalesce into a small city that has law and order, local governance, a functioning commerce, a school, and what could be considered a community. Sure, it’s a community of whoremongers, drunks, and a couple of idiots, but a community nonetheless.

Casting back through the decades and generations and even centuries to set a show is a surprisingly difficult task, especially if the goal is to accurately depict the social customs, language, and day-to-day conditions of life in a more rustic era. In this department, Deadwood did a fantastic job: the one-lane wooden buildings that comprise Deadwood is a far more tangible vision of the Old West than any of the B-movie Westerns that were produced en masse between the 1940s and 1960s on a studio backlot. Instead, these feel like real buildings rather than sets, complete with the wonky, imperfect construction that actual buildings built in the 1870s would have had. 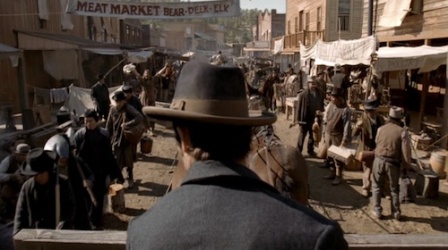 Similarly, the lifestyles and attitudes people would have led and held at the time are also well-observed throughout Deadwood. Instead of the common retroactive adaptation of historical dramas unnervingly overlaying modern behaviors on their characters (a recent example that comes to mind is the TV series Manhattan, set during World War II during the Manhattan Project, many of the characters have 21st century attitudes that takes the viewer out of the historical context the series exists in), which softens the impact that what we’re watching is occurring in that historical period. Not with Deadwood: the men are ardently macho, there are few “hookers with hearts of gold” in the series, and on the whole there’s little varnish on anyone’s behavior. And for those characters that do put on airs are usually depicted as pompous, foolish, or both.

Instead, Deadwood really does give the impression that the 1870s mining town of Deadwood in the unincorporated Dakota territories was as roughneck and dangerous as one would imagine. The miners come into town dirty and unshaven, drink hard, gamble, and patronize whores. There’s little in the way of law enforcement so mob justice or, more accurately, the word of powerful saloon/whorehouse owner Al Swearengen (Ian McShane) is law.

But when Seth Bullock (Timothy Olyphant) and his partner Sol Star (John Hawkes) arrive into camp to open a hardware store, Swearengen–a foul-mouthed, brutal man who nonetheless has a humanity that he fights to repress–takes an immediate dislike to Bullock. Which makes sense, as Bullock was once the sheriff of the town he had just left and the last thing Swearengen wants is law and order in what he sees as his town. Meanwhile, Alma Garret (Molly Parker), a prim woman from the East who had just arrived to camp with her speculator husband, has a strong attraction to Bullock that intensifies when her husband dies under suspicious circumstances. Mrs. Garret stays in town when her husband’s claim proves to be highly profitable and Bullock takes her matters under his responsibility while also finding himself further involved in keeping the town in-line with law and order. 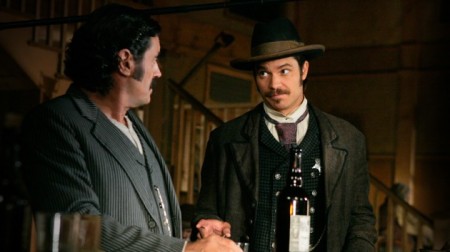 Swearengen has his own problems: his favorite whore Trixie (Paula Malcomson), getting sick and  tired of the abuse she takes from both the customers and Swearengen, begins to grow more independent, eventually starting a romance with Sol Star. Besides this, Swearengen finds himself fearing losing the large measure of control he has over the town when the US government begins to make inroads to incorporate Deadwood into the Dakota territories.

Meanwhile, the town doctor Doc Cochran (Brad Dourif) is a running connection between everyone, whores and businessmen alike. Attempting to keep everyone in camp healthy, the Doc finds stubborn patients, a smallpox outbreak, and horrifying injuries at every turn, and being a cantankerous sort he hobbles from patient to patient trying to dispense good advice to the many alcoholics and drug addicts he comes across.

As the series goes forward, every character seems to interact with each other in Deadwood, either becoming allies, enemies, or just showing indifference. Of course, in this town the people you either befriend or become a nemesis of has its own consequences, and although the “good” and “bad” people are distinguished early on, both sides have shades of gray morality. For example, Swearengen is ostensibly a “bad” guy, but he’s also concerned with a certain amount of decency and fair dealing–even if it’s because this ultimately benefits his own dealings, he will still go out of his way to make an example out of anyone who breaks the camp’s rules. In contrast, Bullock struggles hard to be the decent man he is determined to be, often to the detriment of his own happiness or basic wants. Ultimately, everything in Deadwood is a series of negotiations–between other characters and within one’s self.

Man for Breakfast and Keeping Camp

And a host of other characters, problems, and plotlines begin to emerge and converge across Deadwood as it slowly develops from being a mining camp to a full-fledged town–and the townspeople have to learn to work together to solve these problems as they crop up. The great strength of the series is that it shows how civilization grows from the ground up: out of nothing comes the complex business of creating necessary order that a population demands.

And it’s in this small microcosm that show creator David Milch builds his vision of how society starts slow and crooked and out of necessity begins to coalesce into a functioning organization of business, law enforcement, real estate, and commerce. In the first season, Deadwood is a dangerous, lawless camp for miners and outlaws; by the second season the camp has become more orderly, largely thanks to the efforts of the steadying presence of Bullock but also because Swearengen realizes that disorder isn’t good for his bottom line; by the third season, an entire new section of the camp has become a residential area while a local government and law enforcement arm (led by Bullock) has formed–meanwhile, larger commercial interests start to enter the town, aiming to take over as much of it as they can.

It’s also as fierce a story of the forces of capitalism as any: while small business owners find truck with selling their goods to the local populace, the larger business that is the engine of the town–the mining operations–are initially maintained by individual speculators, but larger companies soon begin to descend on the town to buy up and monopolize the mines. While this benefits the individual operators who sell their stake, eventually these large companies begin to set their designs on the town and its autonomy. Similarly, Al Swearengen could be considered a true capitalist. Sure, he trades in liquor, gambling, and whores, but he’s just selling a supply that has an awful lot of demand. Swearengen, like Bullock, is out for profit: he just sells women instead of shovels. 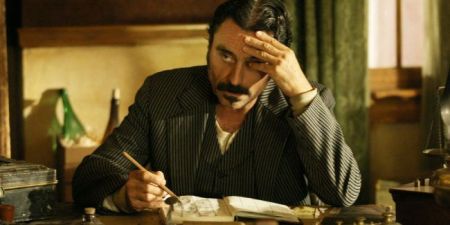 With each episode, Deadwood becomes more and more like a small functioning town where its former lawlessness comes to heel as more and more people arrive, to the point where a school is established, while Mrs. Garret establishes the town’s first bank. In just 36 episodes, the sweeping changes the viewer witnesses in Deadwood ends makes the town a surprisingly different place from what it started as.

Unfortunately, the show was also cancelled at the end of its third season, leaving many plot threads dangling. But what was created in the 36 episodes of Deadwood is fascinating to watch: a realistic Western that doesn’t shy away from the grit, violence, exploitation, and unfortunate realities that would have been endemic in a town on the edge of the world in the mid-19th century.

Although not for all viewers (women may not enjoy the show’s masculine perspective, for example), for those that can stomach a more grotesque, unvarnished vision of history, Deadwood is a masterpiece that shows how civilization is built–whether or not it conforms to your own modern sensibilities (it won’t) is besides the point: it takes a hard look at our not-too-distant past that built the foundations of the society we live in today. 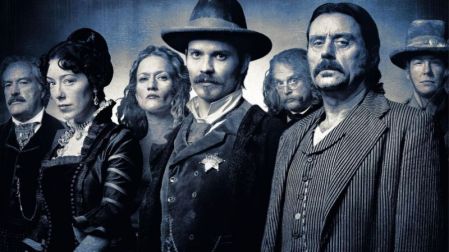