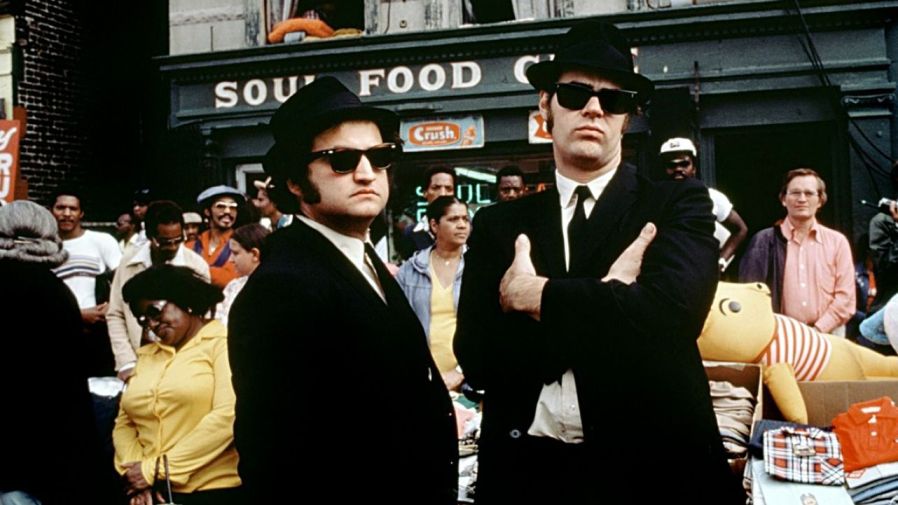 “We’re on a mission from God.”

And it’s not just a boast or else some tough-sounding phrase when spoken with a thick Chicago accent: Jake and Elwood Blues are literally chosen by God to save the orphanage they grew up in. Not that either of them are religious or even particularly good people: Jake just got out of Joliet for a stretch while Elwood is a slippery con man on his own who lives in squalor in the smallest, crummiest apartment in Chicago that’s located next to an elevated train line that rattles and shakes the place when a train passes, which is approximately every 30 seconds.

Once receiving the call from God that they must put the band back together and put on a concert to raise funds to save the orphanage, The Blues Brothers hit the road and start collecting their old bandmates. From there, they get out the word about the show while also dodging the law, Illinois Nazis (“I hate Illinois Nazis!”), and a country-Western band they’ve crossed, all while spontaneous music and dance numbers erupt around them.

Does this sounds kind of silly? Sure. Is it nonetheless entertaining as hell and one of the best comedies ever made? Absolutely. Jam-packed with some of the best R&B, blues, and soul musicians of the 20th century, including Arethea Franklin, Ray Charles, James Brown, and John Lee Hooker, iconic and hilarious comedic performances by Dan Aykroyd and the late John Belushi, and more than a few fantastic car chases, The Blues Brothers aims to entertain and hits its mark 10 out of 10 times. The big set pieces are spectacular, the smaller moments are unbelievably funny, and this rare musical comedy will please fans of both. 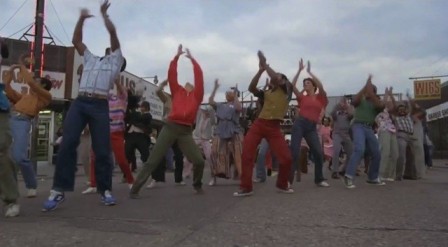 These two go-nowhere, do-nothing, down on their luck musicians open the film as Elwood picks up Jake, who had just been paroled from prison. Rolling down the streets of Chicago listening to Sam & Dave, Jake wonders what happened to a number of things, such as their old car and their band. The answer is: the band disbanded and Elwood traded their old car for a microphone and then bought this old police junker, now dubbed the Bluesmobile; then he proves that it’s a worthy vessel by launching it over an opening bridge.

Visiting the Catholic orphanage they grew up in, terrifying Sister Mary Stigmata beats them both with a yardstick when they curse in front of her, tell them the orphanage will shut down without $5000 to pay the property taxes, and then kicks Jake down the stairs before floating ominously back into her office. Unsure what to do, Jake and Elwood visit a Baptist church service, where during a stellar James Brown performance and dance number, a bright light shines upon Jake, making him glow, after which he backflips up the aisle and testifies that he sees the light as he has a great epiphany: they need to get the band back together. 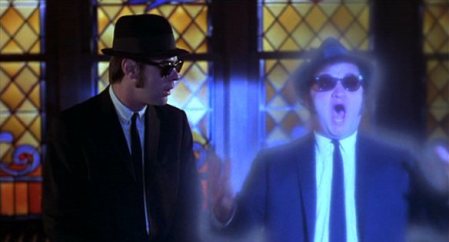 They also get into a car chase the cops, who attempt to arrest Elwood for a suspended license, and eventually drive through a mall, completely destroying everything in their path along the way (and during they casually admire all of the different kinds of stores the mall has). Of course, they evade the cops–because they’re on a mission from God.

Jake and Elwood begin tracking down their wayward band members, some of whom are stuck in a cheesy hotel lounge band, wgile another is a maître d’ at a fancy restaurant (inspiring an insane bit of business where Jake, torturing his reluctant bandmate, asks a man dining with his wife and daughter “how much for the women?”), and  working the kitchen in a soul food restaurant with his wife. This inspires one of the most famous sequences of the movie, as Aretha Franklin (playing the in-charge wife) sings her classic “Think,” which inspires a large-scale dance sequence that seemingly takes over everyone in the restaurant, with even Jake and Elwood jumping up to join in. 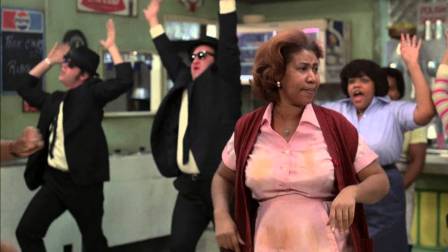 At this point it would be prudent to bring up the power of music in this film: it seems to hold a supernatural power power over the characters of the film, inspiring complex dance numbers that seem to possess everyone within earshot. But this also speaks to the divine power that protects Jake and Elwood throughout the film, where an entire brick walk-up can collapse on them with nary a scratch and they continually escape from the army of cops (and eventually, the actual army) chasing them. This is also around the part where they say to hell with Illinois Nazis and run them off a bridge they’re marching on, which attracts their ire and they vow revenge.

And the film continues to ramble forward as the band goes to pick up some new instruments by music store owner Ray Charles (who–though blind–can also fire a gun with shocking accuracy), treating us to a spirited rendition of “Shake a Tail Feather,” which also inhabits the spirit of the young people out on the street, who perform a choreographed dance to it. It’s just the best. 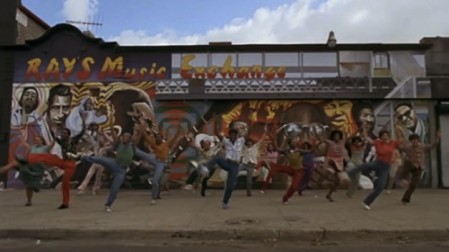 To shore up some money and rouse their band members, Jake and Elwood lie to them about a gig they’ve booked at a country & Western bar, where they lie their way into the gig by claiming they’re the headlining band. After faking their way through some country songs, the band goes to settle up but realizes they drank more beer than their pay would cover and subsequently owe the owner about a hundred bucks, (which, in 1980 dollars is about $80,000. When the actual band show up, and Jake and Elwood split, they’re chased but again get away (mission from God and all that).

Finally, the Blues Brothers start pulling together the idea for one big show out of town in a big hall they book, and the Brothers drive around Chicago with a giant megaphone attached to the top of their car to advertise it as posters go up around town–which the police, the country band they crossed, and the Illinois Nazis all see.

At the hall, the Blues Brothers finally show up after dodging the police, perform two songs to great success, and then–once they see how many of their many enemies are in the audience–make a quick retreat, but not before a record producer gives them a $10,000 cash advance. Now with the tax money in hand, Jake and Elwood start their final approach to complete their mission: to Chicago City Hall to pay off the tax assessor. 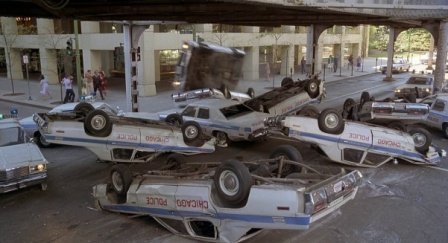 They are chased by the country band, the Illinois Nazis, and pretty much the entire Chicago Police Department at this point, and thanks to God’s protection, they make it to the building in one piece (although the Bluesmobile falls to pieces the second they finally stop). They rush in to pay the tax bill, first pausing to block the doors to a ridiculous degree with everything they can find, and then make their way up to the tax office.

Just as their receipt of payment is stamped, a pair of handcuffs lands on Jake’s wrist and they are arrested while surrounded by the police with their guns drawn. But although they’re in jail, this doesn’t stop the Blues Brothers from playing music, and the film ends with The Blues Brothers performing “Jailhouse Rock” in Joliet Prison.

The Blues Brothers: A Perfect Movie

But that’s just the broad outline of the plot: like with any comedy, the greatness is in the details, performances, and little moments. Throughout, the Brothers are hunted by a mystery woman who attempts to kill them several times–from dynamiting their building to shooting a rocket at Jake while he’s in a phone booth, all to no avail. We finally find out who it is: a woman Jake had jilted. Just like everything else, however, she believes his flimsy excuses as he begs his way out of impending death and lets him go–because they’re on a mission from God.

Which leads to probably the best device in the film and one that more films should try: everything that happens to the Blues Brothers is easily hand-waved away with the idea that they are under divine protection. This is undoubtedly devout Catholic Aykroyd’s idea, one that he also weaved through Ghostbusters about his protagonists being part of a divine plan.

Maybe this literal deus ex machina wouldn’t work for every movie, but in this one it not only works but it helps justify how completely nuts many aspects of this film of this movie are. The car chases continue to get larger and more destructive until finally they’re just dropping cars from unfathomable heights so they can get crashed like Matchbox cars; Jake and Elwood can get crushed by a building or blown up by a rocket and walk away unscathed; and even though they have no less than three determined groups chasing after them, they still complete their mission–immediately after which their divinity fades and they’re once again subject to the laws of man. 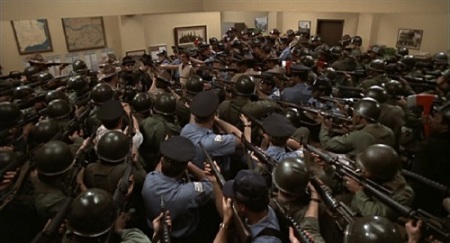 And of course, the Blues Brothers themselves are hilarious creations: two white guys who wear black suits, fedoras, and sunglasses (even at night), only listen to R&B, soul, and blues music, and are dryly sarcastic and often completely unfazed by the total destruction happening around them and even further emboldened once they realize they truly are being protected by God.

Most importantly, this film only treats R&B and soul music with the utmost reverence and respect, going so far as to have many highly influential artists of those genres in the film performing their songs. Although it may be criticized for co-opting American black music and culture, it also resurrected popular interest in these genres and artists single-handed. The movie wouldn’t be The Blues Brothers without this music or the culture that was build around it, and its heavy inclusion in the film raises its profile and deepens the entertainment level so that it’s not just a comedy but a great slice of American culture.

Cool, catchy, and funny, The Blues Brothers is one of those rare great films that doesn’t seem to age or come across as dated even though it’s firmly placed in 1980 and its music somewhere in the mid-60’s. Jake and Elwood still come across as too-hip icons, the jokes are still funny, and the film has nary a dull moment. It’s a movie you could catch halfway through on cable and end up watching the rest of it; it’s the kind of film that you could pop on at any moment and enjoy it; and after watching it, you might just hunt down some of the music featured in the film to enjoy on its own (I still listen to Sam & Dave quite frequently thanks to this film).

And like Ghostbusters, it’s one of those comedies that captured lightening in a bottle: with Dan Aykroyd before he ballooned in weight, John Belushi before he…died, all of the great music legends featured in it still young enough to give spirited performances, and somehow blending American R&B and soul music with wacky comedy, The Blues Brothers is a film that could never be replicated. Always enjoyable and imperishable, it’s like this film is on a mission from God–and one it successfully completes every time.