How do you even begin to describe a movie like Meet The Hollowheads?

Is it a satire or sci-fi? Comedy or demented horror? How can one express what witnessing the truly bizarre is? There’s simply no reference point for the movie or the world it inhabits, and the film doesn’t help shepherd you to any solid conclusion. There are elements of David Lynch’s oddness that makes every interaction a psychosexual Freudian nightmare, and more than a few traces of Cronenberg’s body horror aesthetic, but still none of these are apt comparisons. It’s not artful enough to be considered “High Art” like a Matthew Barnes film, but it’s too smart and self-aware to be either commercial or Outsider Art. It’s one of the weirdest worlds ever glimpsed in cinema, and once you’re done watching it you can’t stop thinking about it–and can’t wait to watch it again.

Meet The Hollowheads was a low-budget, barely released, and even still today too obscure to be considered a canonical cult film released in 1989. It’s a twisted version of 20th century American history refracted through a crystal of nonsensical logic. It’s also a parable about how easily we can accept the aberrant as commonplace if it truly does become commonplace.

So where to begin with this? Think of your average Father Knows Best/Leave It To Beaver/My Three Sons kind of old hat TV sitcom, then introduce radical retro-futuristic design and biological kitchenware, and you’re almost there. It’s like Brazil had a fever dream of 1950’s America and threw up afterwards. That’s what this movie’s like. 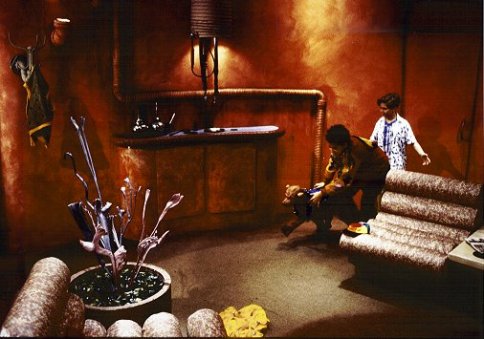 Oh lord, the tubes. There are tubes everywhere, and they control every facet of life for the consumers in this underground nightmare. The mother cooks with tube technology; the daughter makes herself up for a night on the town with unpleasantly designed machines that blow makeup on her face through a prefab molded mask; the entire (subterranean?) world that this film takes place in is run by a giant tube conglomerate that is seemingly the lifeline that everybody depends upon. This is indeed a disturbing universe. 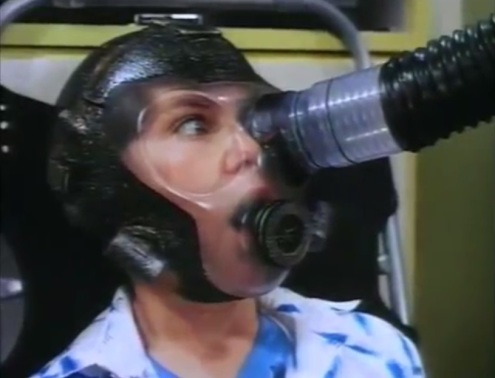 The plot follows a basic sitcom plot: The husband phones his wife to let her know that he’s unexpectedly bringing his new boss home for dinner and is angling for a promotion while their teenage son and daughter get ready to go out to a party that night, and the rest of the plot follows this familiar Father Knows Best plotline.

But the entire movie is a dark subversion of the tropes and archetypes associated with straight-laced sitcoms: Despite their wholesome looks, the two teenage kids of the family (one played by Juliette Lewis, in her first role on-screen!) get blasted on various unknown drugs that either make them intoxicated or wildly amorous, humiliating themselves while at the party, and the visiting boss is an unconscionable lech and rude heel that  both the wife and daughter.. Even the children are rotten: the family’s young son is easily goaded by his malicious friend into acts of mischief throughout, some with dire consequences. Oh, and they play some disgusting game called Splat Ball using the giant parasites they pluck off the back off his pet, the mangiest dog-rat hybrid I’ve ever seen. 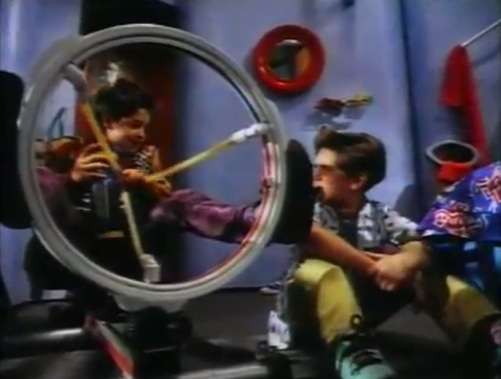 The slang used in the film is weird and unfamiliar: “smooth” is used instead of cool; insults include “pipesucker” and “halfpipe.” But besides these lingual oddities, even the people seem off in some undefinable way: the adults act as if weirdly traumatized from the unknown events that led everybody into this hellish windowless world they live in now, and their youngest son is a “tube baby” but they don’t explain what that might mean. Whatever it is, the Boss makes a passing demeaning comments about how the other kids probably pick on him for that.

The characters use bizarre vocabulary referring to processes and functions of their daily life that not only are incomprehensible but no explanation is ever offered. One particular example of this is the young daughter’s want to use “softening jelly,” whose use and purpose 1) is not clear, and 2) what the fuck? The mother and daughter have a heart-to-heart about how the mom didn’t use softening jelly for a long time with the father, but she’s OK with her daughter’s use of it. This seems like a nice piece of mother/daughter bonding, until you realize that whatever the hell “softening jelly” is, and how it’s used, we the audience are still not provided any context clues to figure out its use. 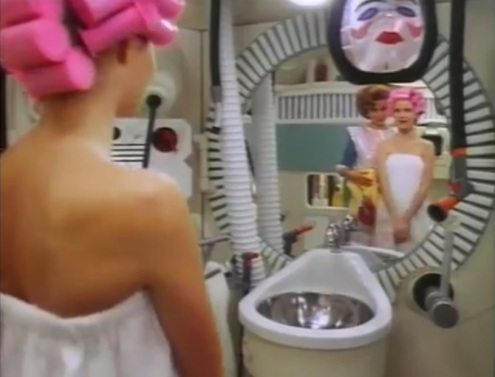 And that may be the most unnerving (and fascinating) part of the film: the viewer has no fucking idea what’s ever going on in this movie. Its frame of reference is about three questions removed from clearing it up for the viewer’s sake and the filmmaker has opted to leave those answers out.

The food is also disgusting and made from organic creatures that have no origin in our local pocket of the universe. But what’s really disturbing is how natural and everyday these bizarre things are to the characters: whatever happened in this world, it must have warped reality so much that tentacle-penis monsters that are stored in the kitchen and get chopped up to make appetizers are regarded like one would when taking out some flour from the pantry to make biscuits. 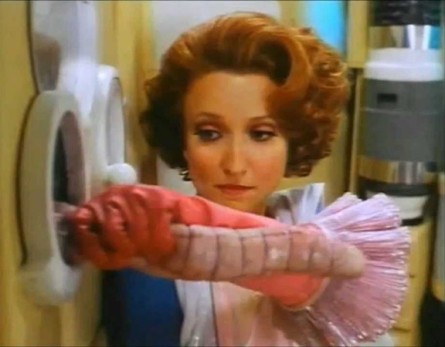 Much of the film’s aesthetic plays like this, where we are intruders in this brightly colored but still dispiriting, bleak, but still somehow idyllic 1950s domestic situation. Some hints near the end point to an alternate universe where most of the world underwent a nuclear holocaust after World War II, and what we are watching are the survivors living in this hellscape, happily ignoring that everything has gone terribly, terribly wrong.

This was the only film special effects makeup artist Thomas R. Burman ever directed, and the film makes the best of his talents, with gross creatures and weird retro technology dominating its world. As for the film itself, as mentioned in the opening sentence of this piece, it’s difficult to categorize–it almost resists categorization because it is so confounding and odd at every turn, unless there’s a category that neatly fits “retro-futuristic parallel universe sci-fi domestic black comedy satire.”

But movies like this are tantalizing to the right viewer, mostly the cult film fan, where an entire bizarre world is highly articulated but not explained to any length. Rene Leloux’s Light Years is a good analogue, but even in that film it somehow comes across as less bizarre because it’s animated and not live-action. 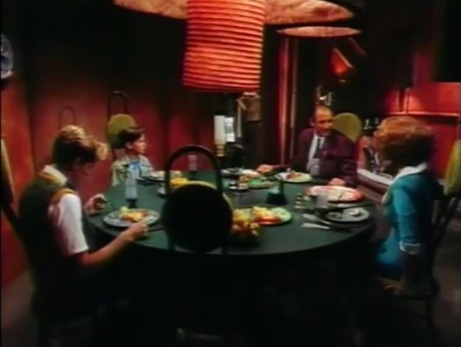 Instead, we watch what transpires, always five steps behind the film, trying to piece together this uncanny version of reality, only we’re not provided with enough information to make the proper connections in our mind to reason our way through it. It just kind of happens to the viewer, and they stumble away from it afterwards wondering, “What the hell was that?”

It’s weird, wild, and subversive as hell. Although not well-known or discussed among cult film enthusiasts, Meet The Hollowheads is a hidden gem among a sea of tubes and pipesuckers. And (at least at the time of publishing) the full movie is available on YouTube here if you’re up for watching something very weird.