How do you make a sequel of a horror movie whose original hinged on keeping the identity of the killer a secret until the end, since once you reveal this, there would be no way to pull that trick off again? By making the deranged killer from the first movie your protagonist in the second one!

We’re deep into the 1980’s by now, five years after the first movie came out. Sleepaway Camp II opens ‘round a campfire at Camp Rolling Hills, where the story of the grisly murders of nearby Camp Anawanna is being told, effectively spoiling the entire first movie. But, they ask, what happened to the killer? Exposition Boy lets us know that she was brought into a psych ward and given a sex change, “Paid for by our parents’ tax dollars,” as the wormy douche puts it. 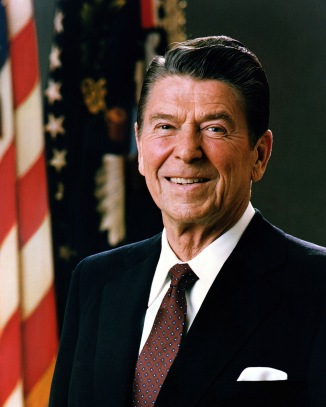 But a counselor comes by to bust up the party, making a point to chastise one of the  female campers present for telling that story. Fortunately, this counselor is Angela from the first movie, now all grown up. After walking a few paces away from the campfire gang, she promptly smashes this girls’ head in and cuts her tongue out for talking trash. Roll the fucking opening credits!

So Angela’s all grown up and a camp counselor, and she and the camp director (who’s maybe her uncle? It’s unclear.) take a stroll and talk about weeding out the “bad kids,” with Angela having “sent home” someone just last night. 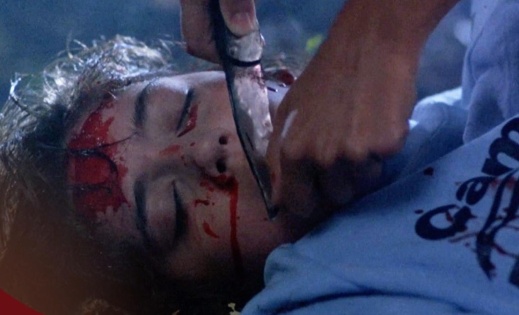 Speaking of which, during our introduction to the girl campers, there’s a lot of T&A right at the start and this group of campers is about 800 times more sexual than the last. But there’s very few little kids in this movie, so I’m a lot more comfortable with the more salacious elements this time around. I guess this is Reaganomics in action.

The camp director looks like he’s in the middle of a heart attack when he announces Angela as the Counselor of the Week and she sings a song, which I guess is something people do at camp (if you’ve gone to camp, answer this question, then keep it to yourself). T.C. Studmuffin attempts to chat Angela up afterwards, but she blows him off since he looks like Donald Trump’s son.

“What do you mean I’m difficult to look at for extended periods of time?”

“Character development” occurs around now, as campers and counselors alike roll out the exposition. It’s interminable. Also, there’s more tits and kids talking about sex. Sleepaway Camp II: It’s Still The 80’s So Shit Like This Is OK!

Angela finds the two prostitutes from Fargo getting fucked up in the woods so I guess she’s going to kill them. Which she does in spectacular fashion, first by burning one down to a charred skeleton, then placing that skeleton in front of the her twin, and then setting fire to her while still alive. Because say no to drugs.

The next scene has Angela sending a girl home that requests it, without killing her, because she’s a good camp counselor. She also lets the camp director know the twins also went home, only they did so in the middle of the night without telling anybody or anybody seeing them before they left. Counselor of the Week, I tells ya!

The boys must have just watched Revenge of the Nerds because they conduct a panty raid on the girls’ bunk while Totally Radical™ music plays in the background, and I can’t tell if it’s diagetic to the scene or not because that’s where my head’s at. This goes on for a while until Angela catches them and flips shit. The girls decide to panty (I’m sorry, “jockstrap”) raid the boys’ bunk later that night, and the same rockin’ tune plays (“Ode to Panty Raids”?). Angela again catches them and the girl that has shown her breasts in every scene she’s been in so far goes on a nice ride with Angela, who says that all will be forgiven if she just says she’s sorry. T&A says she’d rather die, so via power drill that wish is fulfilled. 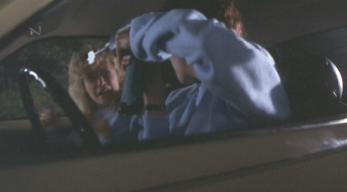 She’s drilling this lesson into her, but her story’s full of holes. Boy, she really got screwed. And another pun, I’m sure.

Angela’s hanging by herself on the steps of an abandoned cabin deep in the woods singing “Kumbaya” when good-girl Molly strolls up to her for a jaw sesh. Angela lets her know that the cabin they’re hanging out in front of CANNOT BE ENTERED and they talk about boys and stuff instead. Angela comes across like a real prude, which is understandable given her past. But she’s a good counselor, so you know, apples into applesauce.

At arts & crafts, some of the boys conspire to scare Angela, and Future Sex Offender Josh is looking at Polaroids he took while spying on the girls undressing. Angela catches him and lets his counselor know, who could not give any fucks less, while she thinks he should be “sent home.”

So the boys dress up as not-copyright-infringing versions of other popular horror movie characters (*cough* Jason *cough* Freddy *cough*) of the time. Scattered plot threads are dropped in with no regard to the audience’s comprehension, and the kid dressed up like Friddy Cougar gets slashed by his own glove that has actual sharp knives on its fingers for some reason even though it’s just a costume this kid put together at camp that afternoon. The Jazon Fourleaves gets carved up by Angela-as-Leatherface.

But this didn’t stop them from taking a group picture together first.

Elsewhere, a completely bonkers sex scene happens in a bathroom (what the hell is that guy doing? In no way is that sex.) before Angela shows up to kill them. But doesn’t. So.

This film has its own Judy named Ally who is also wildly hostile for no reason to the nice girl Molly. So Molly tells Angela, so now Ally’s going to die, obviously. Angela guesses that Ally’s somewhere fornicating (actual word used), and sure enough, she is! But when she gets back from that, an invitation to yet another pants party is waiting for her—in that abandoned cabin in the woods that Angela hangs out in.

And sure enough, Angela’s there and confronts Ally by stabbing her and forcing her into the toilet of the outhouse in a nice “The Reason You Suck” speech before drowning her in shit. It’s super-gross. 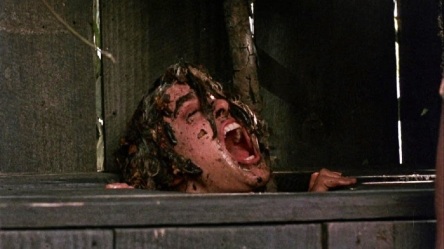 “This wasn’t in the brochure!”

At this point only Angela and good-girl Molly are left in the girls’ bunk, which leads to a delay pedal going off in Angela’s head as she has memories of her murders and singing. This wakes her up, but she goes right back to sleep, only to wake up to being fired the next morning. She has to be out of there by lunch, so she better start murdering in double-time! Molly and her shirtless beau try to help Angela at this point, and they go off to find her at that abandoned cabin in the woods.

They find her, and we find out only four days have transpired since the beginning of the movie. Angela opens up about her murderous past to them, and Beefcake ’88 goes into the cabin where all of the decaying “sent home” campers are chilling. Angela ties up Beefcake and Molly, then does a Pulp Fiction-esque ironic monologue about reading the ingredients of food before buying something. Another counselor comes up to the cabin, only to have his face scalded off by boiling water, and Angela goes about her business of making lunch.

Beefcake finally puts it together that this chick’s the butcher from Camp Anawanna and Angela claims that she’s all better now, as all of the disfigured corpses in the room would attest to. Then she chops Beefcake’s head off. But Molly’s kept alive as someone for Angela to riff to, and she makes a pretty good joke about how her boyfriend’s now on TV.

Angela leaves her tied up in the cabin to…murder some more, I guess. But Molly gets herself out of her binds and knocks Angela the fuck out with a bat. But she doesn’t finish her off because, you know, horror movie. Angela catches up with her, they tussle, more running through the woods, then more tussling, and then Molly backs off a steep incline and bashes her head against a rock.

Back at camp that night, everyone’s been slaughtered by Angela. But then Molly wakes up(!) while Angela gets picked up by a crass motorist who she stabs to death when they’re stopped at a railroad crossing. Molly gets to a roadway and a car comes up to her. But holy shit it’s Angela! Freeze frame!

Like the first Sleepaway Camp, SC II: UC provides us with a sympathetic villain, but that sympathy is implicit from the start; instead of having to put our character through a humiliation conga to develop our sympathy, we know the story with Angela so we’re on her “side” from the get-go.

But what side are we being asked to sympathize with? The psychotic murderer who’s going around slaughtering juveniles for minor behavior infractions (drinking, mischief, trips to Sex Town, etc.). It’s like making Jason Voorhees the protagonist of the Friday the 13th franchise. But somehow, instead of rooting against the violent lunatic in this movie, we’re cheering her on.

It may be because she’s the moral center in a wildly amoral tableau: she’s presented as a camp counselor whose sincerity and code of personal ethics in keeping the campers on the right track fit right in with the right-wing conservative American 1980’s: don’t do drugs, don’t have premarital sex, respect authority figures, and behave in a manner becoming of the new Masters of the Universe. Step out of line and you’ll be murdered; stay in step and you can have a good (clean, moral, “appropriate”) time. For a transgender woman who received government-subsidized gender reassignment surgery and mental healthy care (literally the opposite of nearly everything Reaganites believed in), Angela ends up being the perfect ultra-conservative moral avenger.

I may have liked this movie even more than the first: the plot’s waay easier to follow, it’s more succinct in its action and story-line, there are WAY MORE gruesome deaths on average per screen minute, and they (smartly) removed much of the crassness out of the younger characters’ mouths that icked me out in the first movie.

It reminds me of the first two Evil Dead movies: a sneaky, subversive work within the horror genre at a time when horror movies followed the straight path of, “Hero meets villain, villain kills hero’s friends, hero kills villain, exuent.” In SCII: Electric Boogaloo, villain and hero are one in the same, while the “bad guys” are just kids screwing around and being jerks, as kids do. The handling of the character Angela continues to be really interesting, and whose transgender status is decidedly not portrayed as something gross, weird, or an inherently bad thing. In fact, it almost seems a moot point. Who’d have thought a slasher flick from 1988 wold be more trans-positive than most portrayals of transgender in the following 30 years?

Fun, crazy, violent, and subversive, Sleepaway Camp II: Unhappy Campers gets three and a half out of four Angelas.